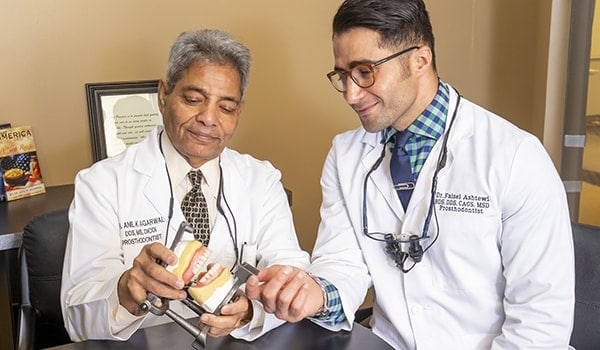 Don’t we all experience that sinking feeling in the stomach when we see police and emergency equipment at a traffic intersection?  I admit that I also get a rush of anxious thoughts about how I can help out those involved.  I’m told that this is the “hard-wiring” of a health care provider.

My patient, Nancy, was in a head-on collision several months ago. Her husband called to tell me that this had occurred and wondered what he should do about her broken front teeth. He didn’t want her in even more pain than she was already experiencing, but she was in no condition to leave the hospital, much less visit our practice.  I explained that Nancy had probably had x-rays taken already at the hospital to determine the fractures caused by impact, and an Oral Maxillofacial Surgeon would evaluate the extent of damage.  The surgeon and I spoke with one another about her future needs. That’s where this part of the story ends.

The most significant reason for telling you about Nancy’s car accident is to emphasize that NO theater performance, tardiness for an appointment, distraction, or drag racing stunt is worth the risk of a head-on collision. I cannot say it enough.

Nancy eventually felt good enough to come in for treatment.  She’d broken her right arm in the crash and kept apologizing because she found it hard to brush that side of her mouth. I was just relieved that she was breathing and walking! Nancy’s natural smile had been vibrant and she wanted it back again. Fortunately, I’ve had a lot of practice with this! We coordinated care with an endodontist because the nerves in two teeth had died.  We put on some “temporary teeth” so she could smile comfortably until it was safe to place permanent crowns, after the area had completely healed.

About five months later, Nancy came in for her dental cleaning wearing a T-shirt with a stoplight on it. The caption said, “Never Run A Red”. She insisted that we take pictures of the damage under our temporary fix in her mouth.  Turns out, she’d made a small album of the damage and rehab that she’d gone through and now wanted to add a perspective on her oral problems, stemming from the crash. Right there on the spot, I nicknamed her “Mission Possible”!