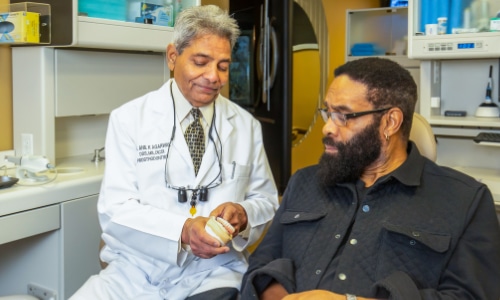 I have three children, and they didn’t always get along. My patient, Marian, had three boys and she claims that they always got along with each other – but never with the kids at school. I’ve never heard that statement before, have you? Her sons were in fights on the playground, bashed around in tag football, shoved down the stairs at school, and often placed in detention. Frequently, she received calls from the school nurse – one of them had fallen on the playground and needed treatment. A couple falls involved teeth getting chipped. That’s where I fit in.
These boys are now adults, and still my patients. They each have a couple of crowns in back and one has four across his front teeth. Two have had a tooth that cracked down the middle, requiring extraction. They’ve each had at least one root canal – and they are under thirty.

The point is this. Teeth are designed for use, not abuse. Marian’s bunch had to learn this the hard way. Teeth can chip even when you use them to open a bag of chips. Perhaps that is how they got the nickname, “chips”! They can break on their edges if used as pliers, or a gripper for screws and nails that you are about to use. Similarly, using your clenched molars to “grip” a tight cap on a bottle or crimped packaging will easily crack a filling. It may not come out immediately, but it will allow bacteria to creep inside the tooth and create decay or infection. This is the short path to a root canal. When I advised one of Marian’s boys about this, he responded with, “then I’ll just have it yanked”, and reminded me that he’s used them as grippers for years, with no problem.
Here’s the problem with “yanking” teeth. Think of your dental arch as a bunch of dominoes lined up, on end. If you remove anyone in the middle of the line, then a repetitious jarring {chewing) near this space makes the other dominoes “shift” or fall over. When we remove a tooth from the dental arch and don’t replace it, neighboring teeth do the same. I’ve seen teeth tipped into former extraction sites at a thirty-degree angle. It is unlikely that these teeth will withstand the daily pressure of chewing, over time.
Contact Winterset Dental…